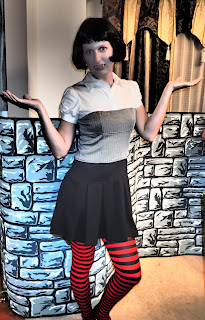 I'm 118 years old.  And...I'm a Vampire.  I live at Hotel Transylvania.  My dad, Dracula, built Hotel Transylvania, a lavish five-stake resort, to be a place where monsters and their families can live it up, free to be the monsters they are without humans to bother them.  There's one catch...NO HUMANS ALLOWED!

This is my dad, Dracula.  He's soooooo overprotective.  But he decided to throw a big party for my 118th birthday!  He invited all his best friends, like Uncle Frank and Aunt Eunice, Wayne the Werewolf and his huge family, Murray the Mummy, and Griffin the Invisible Man.  I took it upon myself to invite a few friends too.

There were a few things to prepare in the Hotel for the party goers.  I decided we need to shed a little light, and had housekeeping put up a few flame cauldrons.  I also had them add a few more cobwebs in the halls.  I'm not one for balloons, banners, confetti or streamers.  It's just not my style.

Next, I worked with the kitchen staff to create a monsterrific party menu.  There was no way I was going to let the guests starve.  The result was a very tasty variety of treats.  There were Monster Toes, Troll Nails, Swirly Snail Cookies, Bat Droppings and Monsterriffic Popcorn Cake! 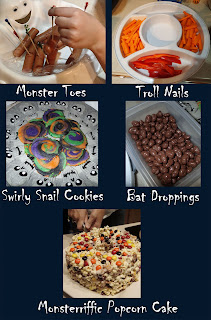 Now that the Hotel was decorated, and the menu was finalized, it was time for guests!  But I had a little secret.  There were humans coming!  I knew Dad wouldn't be happy, so I took my human guests through a Monster Transformation.

First, my little human guests picked out a monster mask, and colored it in.  There were 3-eyed monsters, and monsters with horns, and also a monster that looked like my Uncle Frank.  Even the grown-up humans helped create monster disguises. 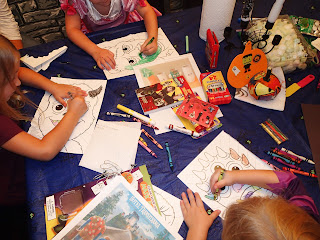 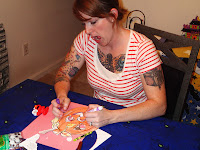 The result... a fantastic group of Monsters ready to PARTY! 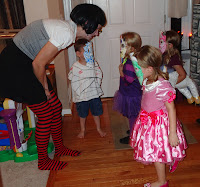 My Dad would never suspect all these cute little monsters were actually humans.  And to prove their monster abilities, we went on a monster parade around the hotel, scaring anyone in site. We tiptoed around corners, and through secret passages, sneaking up on unsuspecting hotel guests.  They did such a fantastic job.  No one ever suspected a thing. 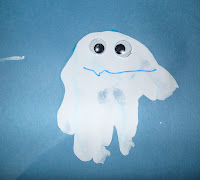 We took the parade through the Hotel and into the Dining Hall for some ghostly craft projects that they could take home and remember the fun time they had celebrating my birthday.  The messiest project was creating hand print ghosties.  We also made toilet paper monsters that were so frightening, that the suits of armor were shaking and clanking.
After using much of our energy creating these fabulously spooktakular crafts, we were famished.  The party menu was a big hit!  Everyone filled their bellies and regained the energy for some fun games. 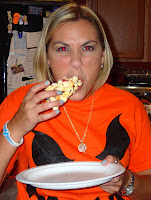 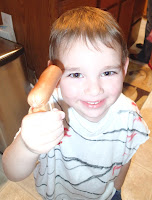 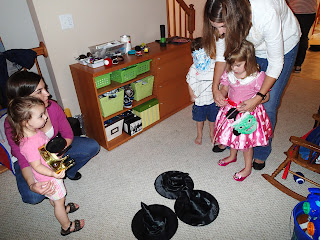 I decided that playing coffin creeper in the graveyard was a little too spooky for my guests, and the weather was not the best for murky pool activities, and lap the moon was definitely out.  We did play witch hat ring toss, and haunted house ball toss. It was the best birthday party ever.  My human friends fit in nicely at the Hotel Transylvania.  And I know they all had such a spooky good time.  I'm sure I'll see them all again! 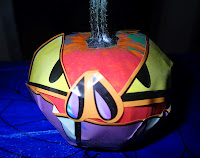 *This opportunity was provided by Crowdtap and the movie Hotel Transylvania.  I took on the role of Mavis from Hotel Transylvania to help create the atmosphere and help our guests identify with the characters of the movie.  You too can get opportunities like this by visiting Crowdtap.  Sign up today*


Posted by Ellie Vation at 7:38 PM No comments: