As the 1 year anniversary of our trip to the Mouse's house approaches, I am still reminded of all the fun we had.  I'm also finding some useful tips, tricks and fun information that was useful during out trip, that would be useful for others.

Last year was our now 5 year old's first trip to the World, and we wanted to make sure it was the most magical trip ever.  I scoured the web for any helpful information.  The result.... an overflowing Pinterest board.

Let's talk Tinkerbell Gifts, because this is one of the most fantastic ideas to add a little extra magic to any kid's trip to WDW.  The idea is that Tinkerbell, or whomever your child's favorite character happens to be, leaves a little something special in your room each day.  I personally thought this was brilliant!  Not only does it have that magic factor. it also creates a method of reducing the
meltdowns for souvenirs, and may even encourage good behavior.  In the weeks leading up to our trip, I searched through the clearance section at Walmart, the $1 spot at Target, and our local Dollar Tree for gifts.  I also made use of my creativity for a few of them.  The biggest purchase was pins for trading/collecting from eBay.

***Time for a Public Service Announcement... when purchasing pins from eBay... DO YOUR RESEARCH!!  Google "Disney Scrapper Pins".  They exist, and unfortunately, the trading pull on any given Cast Members' lanyard in a park has been "diluted" with these scrapper pins.  They are not illegal, and some are cool, but still...  Also, make sure you purchase from an eBay seller with a high ranking to reduce your chance of being scammed.   ***

Back to Tinkerbell Gifts... I did end up with a pretty darn good stash of gifts for my littlehead.  Next step was to organize and write cute little messages to accompany them.  This is definitely fun.  Let me show you how my notes turned out.

The first gift was came the night before the trip.  Littlehead found a nice surprise waiting for him on his bed.  Mickey had somehow left a package with new Disney PJs and a set of activities for the plan.  He also included a reminder to wear the "I'm going to Walt Disney World Resort" shirt littlehead had gotten for his birthday. 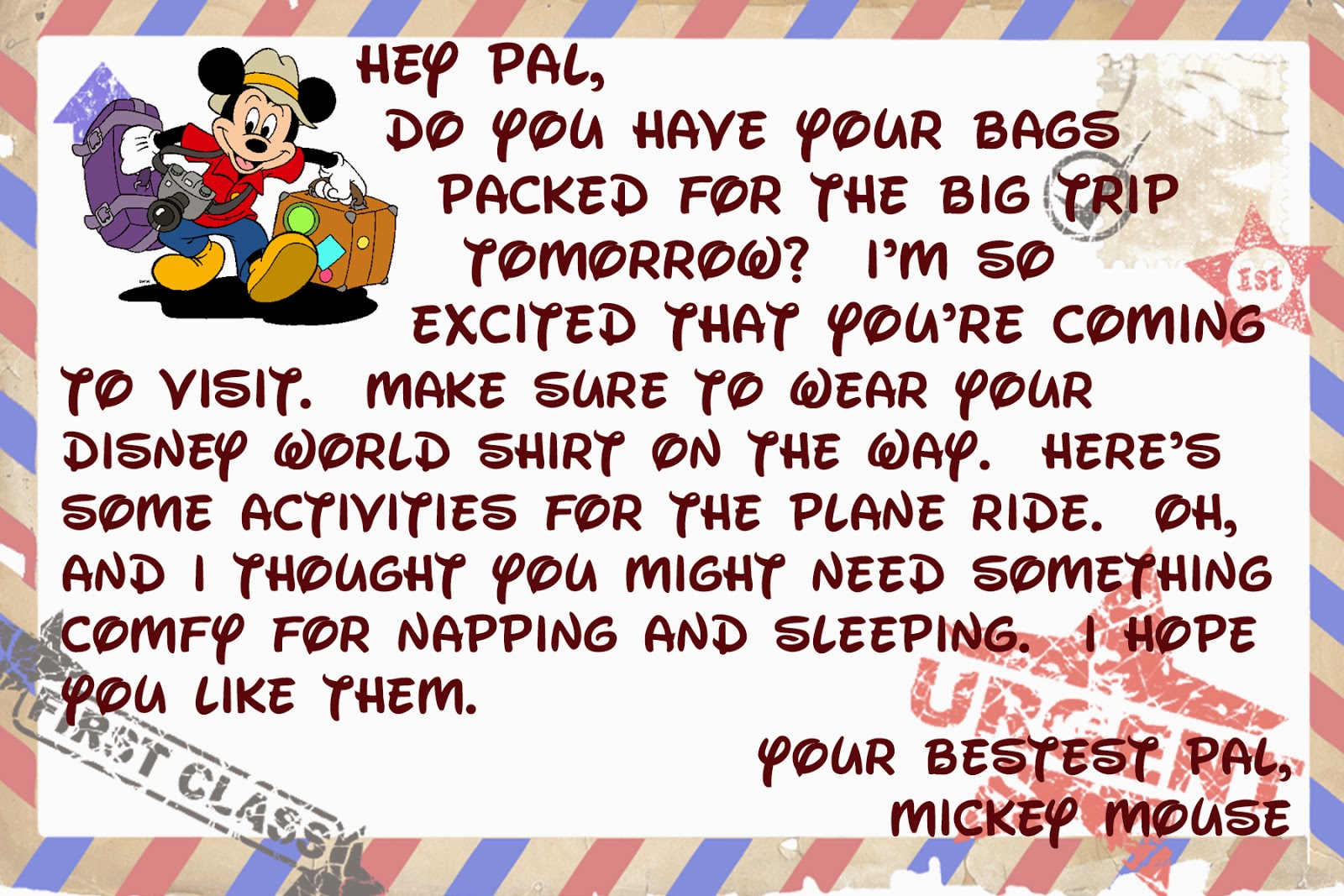 Then next gift was delivered very early the next morning (it's amazing how Mickey mail works).  Russell (from Up) was kind enough to send a note of encouragement for littlehead's first plane ride.  There was also some animal guides and an invitation to become a Wilderness Explorer at Animal Kingdom, as that was the planned for after check-in at our resort. 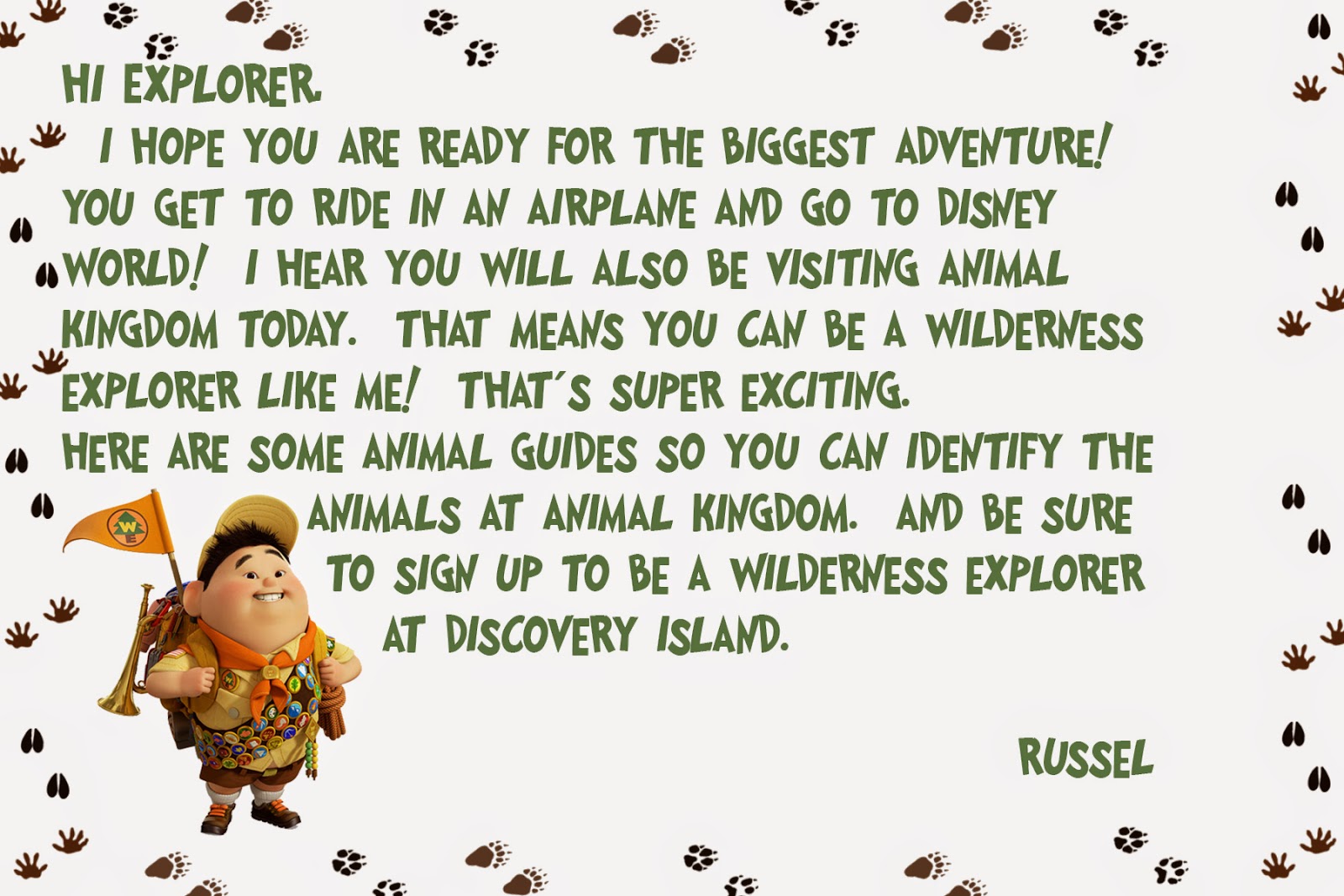 Every morning, a new gift was waiting somewhere in our room at Caribbean Beach, and sometimes next door in Mimi and Poppy's room.  The character who sent the package usually corresponded with the activities of the day.  Gifts included:

And each day, there were pins to either use for trading purposes, or just to add to the collection.

Here are the notes that were left each day.  The littlehead was very excited to see who left him a gift each day.  There was one day taht two gifts were delivered.  That would be the day we had breakfast with Lilo, Stitch, Mikey and Pluot at 'Ohana's before heading to Magic Kingdom for half of the day.  We took time for a nap, during which the second gift was found, before heading back to Magic Kingdom for Mickey's Not So Scary Halloween Party.

For the day that we visited EPCOT, this "communicator" note was left by Major Monogram, in addition to the note from Duffy.  M.M. was recruiting our little agent to take part in the Agent P Adventure throughout EPCOT.  That was a fun addition to the World Showcase. 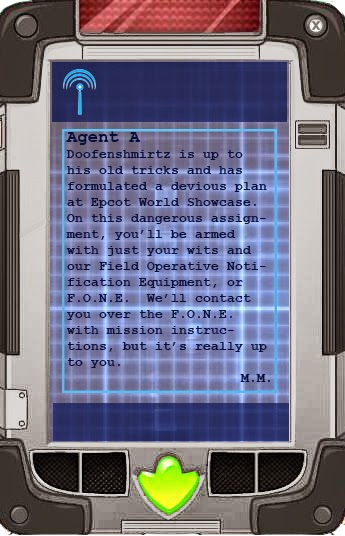 Were the Tinkerbell gifts a success?  I'd say so. Littlehead did not pester us every minute of the day for a souvenir.  We did find some special items through the parks, like tshirts and even took the time to have a silouhette done.  oh, and Pressed Pennies.... those were a hit as well.

About those Pressed Pennies... littlehead loves them.  And they do make a pretty cool souvenir.  Collect your pennies and quarters prior to your trip.  Then get a container.  Those M&M Mini cannisters are the best.  You can easily find printable wraps around the Internet, or you can design your own.  Use this pattern to load your quarters and pennies for the most efficient method:  Quarter, Quarter, Penny.  You will need $.51 cents per each pressed penny.  Want to be even more efficient, have a list or map of the pressed penny locations printed, or saved on your phone.  You can find a good up to date list here or some maps here.

I hoe your find this helpful.  If you have any questions about Tinkerbell Gifts or the notes I created, don't hesitate to ask.  And if you're planning your next trip to Disney, good luck and I hope you have a magical time.


Posted by Ellie Vation at 8:31 PM No comments: